How to Remodel for Accessibility

How to Remodel for Accessibility

To move or not to move? When a family realizes their home isn’t practical for an aging or disabled family member, one option is to remodel for accessibility.

Todd and Paula Crawford tried to sell their two-story home in Ringgold, Georgia, after their son Mackenzie was diagnosed in 2004 with Duchenne Muscular Dystrophy, a rapidly progressive form of muscular dystrophy that occurs primarily in boys.

They couldn’t find a buyer during the recession, nor could they locate a home on the market that would meet Mackenzie’s accessibility needs and still accommodate the rest of the family. So they decided in August 2013, after Mackenzie, then 13 years old, fell down some stairs and broke his arm, to remodel their house to make it handicap accessible.

“After [the fall], he quit going up and down stairs,” Todd says. “We had to put a mattress in our dining room for him to sleep on, effectively making it his bedroom. He lived out of a laundry basket, in regards to how his clothes were stored, for a year until we got the remodel completed.”

If you remodel for accessibility, your first priority should be to get the access you or your loved one need, experts say. Additionally, maintain your home’s appeal to as broad a market as possible, should you eventually sell it, to help recoup your investment. 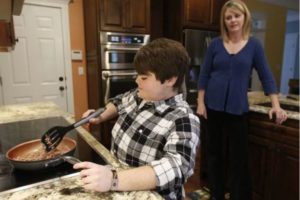 Make changes that are universally appealing or easily reverted to standard use, says Sandra O’Connor, a Realtor in Greensboro. “No matter how beautiful a job you do, if the person who buys your house doesn’t want or need those changes, then your changes lower the value of your house.”

The Crawfords first wanted to ensure that their home wouldn’t have a clinical look. So they hired Van Deusen Design to draft a plan that gives the family the functionality they need while maintaining broad market appeal. They selected Van Deusen, partly because she is a Certified Aging-in-Place Specialist (CAPS) residential designer. Todd says the modifications Van Deusen recommended met the access and turn-around radius standards set by the Americans with Disabilities Act.

The Crawfords wanted Mackenzie to be able access and use the main floor, just like every other family member. That meant a new bedroom and bathroom, but they didn’t want to expand beyond the lower level footprint.

Van Deusen recommended removing three walls to create an open floor plan to the living room and dining room. She added a center kitchen island and widened the door openings and aisles so a wheelchair could easily navigate the space. Van Deusen put the new bedroom for Mackenzie, with an in-suite bathroom, where a covered porch had been. To maintain the exterior aesthetics of the house required by the Crawfords’ homeowners association, Van Deusen relocated a door to make room for a patio ramp.

“You can’t see the ramp from the front of the house,” Van Deusen says. 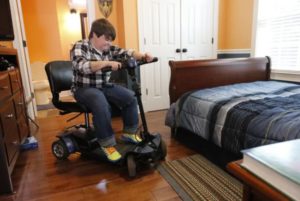 Mackenzie maneuvers his scooter through his accessible bedroom at his home. (Photo by Doug Strickland)

Now that the first-year baby boomers have reached retirement age and will turn 70 in 2016, O’Connor expects demand for homes that are handicap accessible to grow.

“We’re returning to looking at home buying as a long-term investment,” O’Connor says. “When you look at it long term, you realize it has to serve a variety of age groups and families.”

Globe Bath & Kitchen Remodeling expanded services in 2014 to specifically cater to homeowners who want more accessibility in their bath and kitchens.

We decided to call [that division of] our company Independent Home Living because of the growing need for seniors to live in the comfort of their own homes instead of moving to nursing homes,” says Bereket Daniel, sales and marketing manager for the contractor.

Daniel says the growing number of products that suppliers unveiled at the 2015 Kitchen and Bath Industry Show in Las Vegas, including folding teak wood bath benches and pull-down wall cabinet shelves,  will make it easier for homeowners to age in place with more attractive equipment. 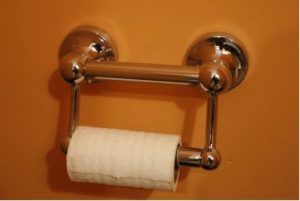 Items like this toilet-paper holder doubles as a grab-bar for homeowners who need handicap accessibility in their home. (Photo by Doug Strickland)

Todd Crawford agrees. He says the grab bar in Mackenzie’s bath stands out less because it’s also a toilet paper holder. Crawford says the subtle addition, along with Phillips’ and Van Deusen’s attention to detail, gave his family the space and look they wanted in their home.

Best of all, the renovations are high end and include granite counter tops, drawer cabinets and stainless steel appliances in the kitchen; a two-story ceiling in the great room and a slate tile shower with a built-in bench in the bedroom.

“[The modifications] had to be attractive,” Todd says, adding that Mackenzie’s handicap-accessible bathroom isn’t obviously so. “The bathroom has the exposed pipe [under the freestanding sink to allow for a wheelchair to roll up flush to the sink], but other than that, it could be anyone’s bathroom.”

According to an income tax specialist in St. Louis Park,  Minnesota, homeowners can deduct the remaining cost of any medically necessary improvements from their federal taxes, minus the increase to the home’s value.  “To protect your deduction in sizable items, such as a pool, elevators, or ramps, I’d suggest getting a full written appraisal,” he says.

Look for remodeling companies that specialize in aging-in-place or accessible renovations. Many carry the CAPS designation.

Todd is confident that if the Crawfords decide to sell their house, the improvements they’ve made will attract a variety of buyers, including those who want an in-law suite, home office or guest area.

“I think what we’ve done will sell this house in the first few showings,” he says.

Schedule a free assessment with our Certified Aging in Place Specialist.

We will install your grab bars NEXT DAY
or your first grab bar’s absolutely FREE.